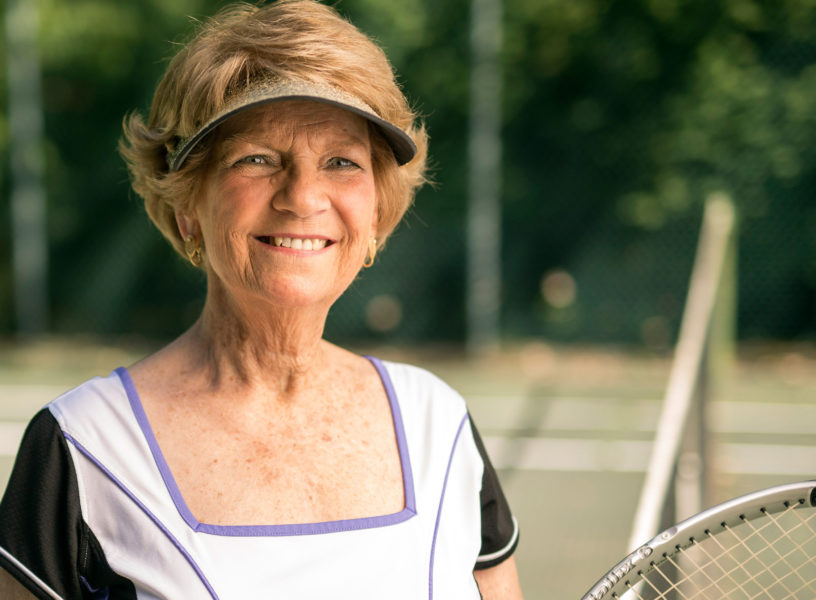 A modern medical dilemma: Do you wait and watch a suspicious spot? Or have diagnostic surgery?

After two years of worrying about a nodule in her lung, Emmy Edwards said yes to surgery.

She could have flipped a coin, had the stakes been smaller.

A nonsmoker, Edwards had been more worried about heart disease than lung cancer when the tiny lesions showed up during a cardiac CT scan. They were in a part of her lungs where they couldn’t be biopsied with a needle.

A team at Vanderbilt-Ingram Cancer Center spent two years evaluating her case, a process that involved advanced imaging, probability analysis and a lot of medical pondering.

Edwards, a healthy, active woman in her 70s who played tennis regularly, personified a quandary within cancer research and treatment: the debate about early intervention vs. overtreatment.

Doctors didn’t know for certain that Edwards had lung cancer until she underwent surgery on Aug. 28, 2015. They’re still not certain how much risk the malignancy posed, but Edwards is helping them solve that mystery.

What to do about lazy cancers?

Her nodules were discovered in 2013, the same year that a working group endorsed by the National Cancer Institute raised concerns about overdiagnosis and overtreatment. The group noted that some cancers are “indolent disease that cause no harm during the patient’s lifetime,” in an editorial published in the Journal of the American Medical Association. But the group identified only a few of those lazy cancers.

“Molecular diagnostic tools that identify indolent or low-risk lesions need to be adopted and validated,” it wrote.

One of them is Pierre Massion, M.D., Cornelius Vanderbilt Chair in Medicine, who kept watch over Edwards. A scientist who specializes in lung cancer, Massion has identified effective strategies for early detection. He is involved in several research initiatives to better understand the progression of the disease. His investigations include delving into how oncogenes progress to tumors and pinpointing the molecular biomarkers for malignancies.

With Edwards, he had to rely on imaging. The first nodule, which had been discovered in her left lung during the cardiac scan, wasn’t indicative of cancer. But a second one, found in her right lung during a follow-up chest CT, was suspicious.

“Three months later, I was worried about this,” Massion said.

Edwards and her husband, Frank, drove two hours to Vanderbilt from Crossville, Tenn., for many appointments during this period of monitoring.

The nodule in the upper lobe of her right lung started to change in 2014.

The right information from the right technology

Radiologists used advanced diagnostic tools to see that the solid portion of the nodule was growing — something that would not have been immediately apparent with less intensive screening technology. Ronald C. Walker, M.D., alerted Massion and provided him with images from many perspectives, and information about the importance of its density.

“To the non-expert, this nodule is nothing to worry about,” Massion said. “But to the expert, when the solid component of the nodule grows, this may signify cancer.”

He noticed that the solid portion of the nodule had grown by 61 percent, which is usually a signature of cancer. But he still could not definitively determine whether it was benign or malignant.

Massion has devoted 17 years to lung cancer research. Other scientists seek his advice. But he wanted other opinions. He brought Edwards’ case before a panel of experts at Vanderbilt-Ingram Cancer Center’s tumor board. The panel included a radiologist, oncologist, pathologist, surgeon, pulmonologist, radiation therapist and statisticians who work in cancer modeling.

It included Eric L. Grogan, M.D., a thoracic surgeon, who has worked with Stephen Deppen, Ph.D., an epidemiologist, in using a surgery-determination formula called the TREAT model. It was developed at the Vanderbilt-Ingram Cancer Center with support from the Department of Veterans Affairs.

“We have developed a tool that allows us to go to a website and pull up a calculator that shows the patient what the probability is of whether a lesion is cancer or not,” Grogan said.

The two wrote an article about their risk model for lung nodule classifications, published in the spring 2015 issue of Seminars in Thoracic and Cardiovascular Surgery. Their article noted that in February 2015 Medicare and private insurers had begun covering CT scans for people at high risk for lung cancer. Grogan and Deppen estimated that 3.1 million lung abnormalities will be discovered within the first three years of expanded coverage, setting the stage for possibly thousands of unnecessary diagnostic surgeries.

While other risk models have been developed, Grogan and Deppen’s study showed that TREAT had better diagnostic accuracy. However, there were too many gray areas with Edwards for the formula to be definitive.

Facing 51 percent odds that she didn’t have cancer, and 49 percent that she did, Edwards didn’t want to flip a coin on cancer.

Edwards talked it over with her family and decided it was best to have diagnostic surgery as a healthy 75-year-old, instead of potentially having to undergo the operation in later years when the nodule — possibly by that time cancerous tumors — had spread.

“We decided, let’s go ahead and have it out. Because you never know what the catalyst is that will make these decide to grow and be more dominant,” Edwards said.

In the operating room, Grogan worked with an interventional pulmonologist, Otis B. Rickman, D.O., who marked the lesion. The marking of the tumor helped Grogan perform a minimally invasive surgery.

The pathology team informed the surgery team while still in the operating room that the nodule was cancer — adenocarcinoma. The surgical team removed the upper lobe of Edwards’ lung, and lymph nodes through the same incisions while she was still under anesthesia. When the procedure was over, her biggest incision was less than an inch long.

“The remarkable thing about this lady and her clinical care — and I’m not even talking about the research piece here — is really the amount of expertise she was able to garner from our institution,” Grogan said. “I think that’s a very important message. When Pierre (Massion) has someone that he is concerned about, (that patient) is not just going to get one person’s opinion.

“He brings (the patient’s case) to the tumor board. The radiologists do special models to determine that the lesion has grown. Interventional pulmonologists help to localize the lesion so that a minimally invasive operation can be performed. In the end, patients receive state-of-the-art, personalized care because of a comprehensive skilled team that comes together at the right time.”

Edwards donated her tumor and lung tissue to Vanderbilt-Ingram Cancer Center for research. Although adenocarcinoma is a very common cancer, every tumor is different. Each is made of different mutations and genetic characteristics.

Massion was awarded National Cancer Institute funding in March 2015 to decipher the molecular processes that spur invasive actions in lung adenocarcinoma. He’s one of two primary investigators of a multi-institutional effort to understand the biology of these early tumors, identify biomarkers for this type of cancer and stratify the degree of risk they pose. A first step is increasing tumor donations for adenocarcinoma repositories.

He’s also the principal investigator of two other NCI-funded initiatives. One is to develop a prediction model to help physicians determine the best intervention for lung adenocarcinoma — surgery, chemotherapy or adjuvant immunotherapy — based upon a genomic molecular test. The other initiative is research to better distinguish between benign and malignant nodules discovered during CT screenings.

Cancer cells, and people’s reactions, can be very different

Edwards said the knowledge that she was helping cancer research through the donation of her tumor made her feel less like a cancer statistic.

Massion pointed to a screen where portions of Edwards’ tumor were color-coded. “This is her tissue. The different areas of the tumor mean that she may have different types of clonal populations in these little squares.”

The cells within a tumor can have distinct differences in gene expression, growth patterns and metastatic potential. Massion explained how this heterogeneity in Edwards’ tumor was dominated by cells identified in blue that might respond well to one type of chemotherapy only to have the pink cells spur into action.

“That’s a nightmare for the oncologist,” he said.

Edwards’ cancer was caught early enough that chemotherapy was not prescribed. She said doctors did not pressure her into undergoing surgery. With two graduate degrees and the experience of having run a successful business, Edwards had the education and experience to make the call. She also had the support of her husband, a retired university professor, to give the decision a logical analysis.

As scientists such as Massion discover ways to better analyze the real risks posed when nodules pop up in CT scans, surgeons like Grogan will also need better tools to explain that information to patients. Grogan said that while he’s pleased with how the TREAT model has worked, he sees areas for improvement.

“Patient reaction to this information is varied, and the shared decision-making that is going on with the management of pulmonary (lung) nodules is very complex,” he said.

One challenge for doctors is helping a patient sort out emotional responses, Grogan said, raising the scenario of someone saying no to surgery because a family member may have died from a surgical complication. Physicians also have life experiences that play into decision-making.

Grogan is partnering with a human factors expert, Matthew Weinger, M.D., Norman Ty Smith Professor of Patient Safety and Medical Simulation. Together they seek a follow-up VA grant to look at how the TREAT model impacts physicians’ recommendations to patients with pulmonary nodules. They also want to study its effect on the decisions made by those patients.

A month after her surgery, Edwards was doing brisk mile-and-a-half walks with her husband near their home on Tennessee’s Cumberland plateau. She said she’s looking forward to getting back on the tennis court and traveling again.

“I really, really truly feel blessed because we were able to discover this thing so early,” Edwards said. “Now, the prognosis is very positive.”

Tom Wilemon is an information officer in the Vanderbilt University Medical Center News and Communications Office and the editor of Momentum magazine. This story first appeared in the Winter 2016 issue of Momentum, the magazine of the Vanderbilt-Ingram Cancer Center. Photography by Daniel Dubois.

Those at highest risk for lung cancer are ages 55 to 74; and current or former smokers with 30 or more pack years — though some people who have never smoked get lung cancer. See if  lung cancer screenings are right for you. 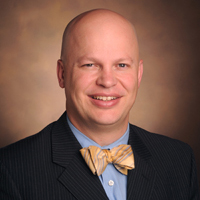 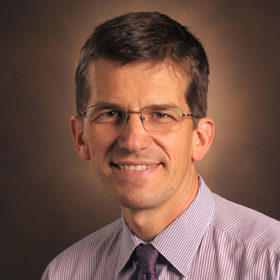 Pierre Massion, M.D., is Ingram professor of Cancer Research and a professor of Medicine. He is also director of the Cancer Early Detection and Prevention Initiative at Vanderbilt-Ingram Cancer Center, chair of the Lung Cancer Cooperative Group in the Early Detection Research Network (EDRN) an active member of the Scientific Advisory Board of LUNGevity and a contributing member to the National Comprehensive Cancer Network’s lung cancer screening guidelines committee.

Pierre Massion, M.D., is Ingram professor of Cancer Research and a professor of Medicine. He is also director of the Cancer Early Detection and Prevention Initiative at Vanderbilt-Ingram Cancer Center, chair of the Lung Cancer Cooperative Group in the Early Detection Research Network (EDRN) an active member of the Scientific Advisory Board of LUNGevity and a contributing member to the National Comprehensive Cancer Network’s lung cancer screening guidelines committee. 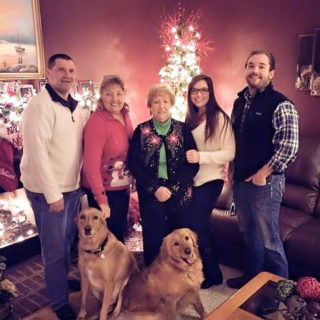 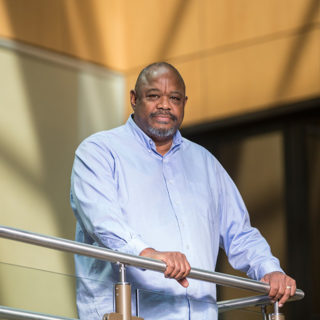 A decade after lung cancer, aspiring minister aims for a ‘significant life’