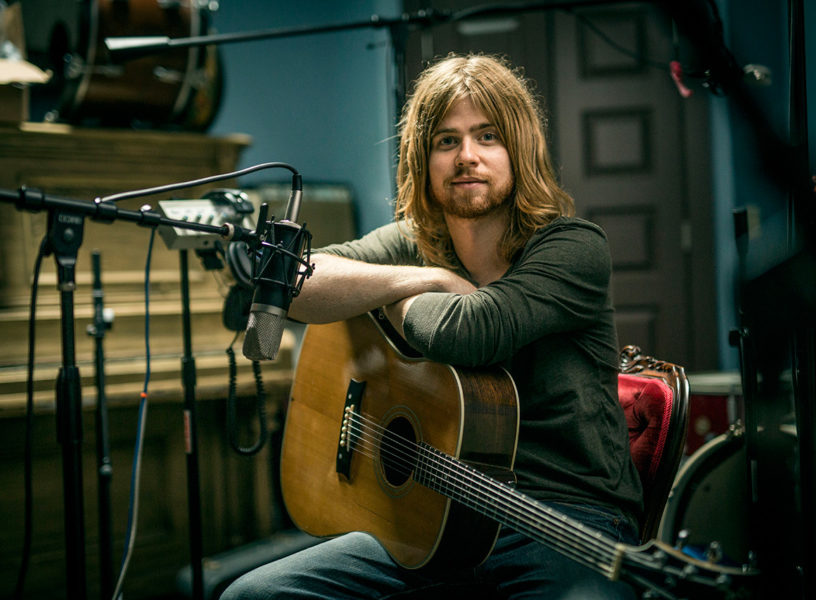 Surgeons preserved his balance, his career and even his rock-star hair, in an unusually challenging case.

Music has always filled Andrew Leahey’s mind and his heart. He never expected an acoustic neuroma to interfere with that.

With a mom who taught music classes, Leahey spent his early years in Richmond, Virginia, plinking on the keys of the family piano, listening to melodies and singing along.

“I thought it was just normal, that everybody walked around the house singing all the time. I didn’t realize it was a skill that I was just lucky enough to have,” remembers Leahey.

In New York, where he moved after college, others started to recognize his talent and he spent two years as a community member of the Juilliard Chorus.

As often happens with budding songwriters and performers, he eventually headed to Nashville, working a day job as a music journalist for publications like Rolling Stone, and a night gig playing guitar and headlining a heartland-style rock band, Andrew Leahey & the Homestead.

At age 30, with a career on the upswing and a young wife, Leahey was enjoying the ride — until a tumor at the base of his skull threatened to derail his trajectory.

An ear full of cotton

In July 2013, following a national tour with the band, Leahey noticed a hearing problem in his right ear.

“There was a pressurized feeling. It felt like my ear was filled with cotton and taped shut,” explained Leahey.

Initially, doctors diagnosed the problem as a probable virus and prescribed steroids, which helped the hearing but the high dose left his head spinning. While shopping for groceries, he passed out in a parking lot, cracking his head on the asphalt.

His wife, Emily, insisted on an MRI, which finally revealed the culprit for the hearing loss: a small growth deep in his head. The tumor, called an acoustic neuroma, was small — only 6 to 8 millimeters — but it was sitting along the nerves that control hearing and balance.

Leahey’s doctor referred him to physicians at Vanderbilt’s Skull Base Center.

The skull base is the area behind the eyes and nose that separates the brain from other areas of the head. Skull base tumors are nestled into the brain stem, some of the most exquisitely delicate real estate in the human body. They can invade important glands like the pituitary, or imperil the vascular system to the brain. Adults are far more likely to develop these tumors than children.

Experts aren’t sure what causes such growths, although risk factors include genetic conditions, chemical exposures and previous radiation therapy.

While most skull base tumors are benign, meaning they are not cancerous and not spreading as fast as a cancerous growth, they can be just as lethal.

Removing a skull base tumor like an acoustic neuroma, also known as a vestibular schwannoma, is one of the most challenging operations Vanderbilt surgeons face, with some surgeries lasting up to 20 hours.

“The anatomy is fairly unforgiving in that area,” said Reid Thompson, M.D., William F. Meacham Professor in Neurological Surgery and chair of Neurological Surgery. “It’s the brain stem, cranial nerves, the blood supply to the brain stem. That’s the space that we’re operating in and it’s a small space. Acoustic neuromas have major arteries that supply the brain stem draped over them and often supplying blood to the tumor so you have to dissect the arteries away.”

Like most patients with acoustic neuromas, Leahey had several choices: surgery, stereotactic radiosurgery, standard radiation over five to six weeks, or watchful waiting.

Stereotactic radiosurgery is a nonsurgical outpatient procedure which uses a focused beam of radiation to treat the tumor without anesthesia or risk of bleeding or infection. Stereotactic radiation offers 1 millimeter accuracy and is especially useful for acoustic neuromas not causing compression of the brainstem, for those who still have useful hearing, or for those who are not eligible for surgery or prefer a nonsurgical approach.

“We began performing radiosurgery here at Vanderbilt for skull base tumors in 1990, and for acoustic neuromas in 1994,” said Anthony Cmelak, M.D., professor and senior medical director of Radiation Oncology. “Radiation can be delivered extremely precisely, particularly with modern imaging and computer technology. Patients enjoy the convenience of outpatient treatment given over one to five daily sessions, each 30 minutes or less. Our experience and outcomes show it can be a good alternative to surgery in many patients and minimizes the chance of treatment complications.”

Because of his young age and his career as a musician and music journalist, Leahey opted for a more aggressive treatment: surgery.

For this delicate surgery, Leahey would benefit from the expertise of physicians and other specialists at the Skull Base Center where, for nearly 40 years, Vanderbilt experts have refined techniques to diagnose and treat skull base tumors.

Vanderbilt has become a referral center for these types of tumors, with many patients traveling great distances to seek specialized treatment. To streamline the patient experience and reduce the need for extra travel, the Skull Base Center has hired a patient care coordinator to help arrange housing and ensure that patients can see several specialists or get needed tests during each visit.

Thompson said one of the advantages of Vanderbilt’s Skull Base Center is the deep bench of highly-skilled and renowned surgeons — professionals including David Haynes, M.D., professor of Otolaryngology and Neurological Surgery and director of the Division of Otology/Neurotology; James Netterville, M.D., Mark C. Smith Professor of Head and Neck Surgery; and Alejandro Rivas, M.D., assistant professor of Otolaryngology.

For Leahey’s case, Thompson partnered with Rivas, whom Thompson calls “one of the most naturally gifted surgeons I’ve ever worked with. He was born to be a neurotologist.”

Rivas learned about the specialty from one of the best, his father, who operates one of the largest surgical ear and hearing clinics in South America.

“I owe my job and my life to their work”

Working as a team, Thompson and Rivas planned and orchestrated the precise movements and approaches that would provide the best and safest access to the tumor. They decided to make a small C-shaped incision behind the right ear and enter the skull at a low angle. Using microsurgery techniques, they approached slowly and carefully, nudging aside a portion of the brain called the cerebellum to access the tumor.

One of the biggest challenges for this surgery is finding a way to remove the tumor while sparing the facial nerve, the hearing nerve, and if possible, the balance nerve.

“Normally to remove these tumors we have to cut the balance nerve, but we were able to remove his tumor without cutting his nerve, which is very rare,” explained Rivas.

Cutting the balance nerve can leave patients with a range of side effects.

“They will end up with some degree of dizziness but we can improve that with physical therapy over time,” said Rivas. “They can also experience hearing loss, change in taste, double vision, hoarseness, numbness of the face, dry eye, lack of motion in one shoulder, decreased motion of the tongue which would affect speech, ability to drink and eat, and headaches.”

“It was so favorable that we just peeled it off and we could see the attachment to the only fibers of that nerve where it was coming from, and we cut those and preserved all of the balance nerve. I wasn’t expecting that and that was a very pleasant bonus.”

“It completely changes how you animate your face, how you interact with people. We don’t think about it but it takes a lot of energy to animate your face, and patients describe it as feeling exhausted from trying to animate the face. So we agonize over the nerve, and that’s part of the reason the surgery is so challenging and why it takes as long as it does.”

Leahey’s surgery lasted more than 10 hours. The physicians had warned him that he faced a 50 percent chance of losing his hearing, so he didn’t know what to expect when he awakened. In the recovery room the first words he remembers were from his dad, telling him his hearing and balance nerve had been spared. He was elated to realize that his life would continue to be filled with the voices of loved ones and the strains of music.

He has retained about 70 percent of his hearing in the affected ear and credits his surgeons with the positive outcome.

“I feel like I wound up with the dream team by getting Rivas and Thompson. I don’t know if they were attracted to the case because of my age, or if they saw something in the MRI scans that made it look like an interesting case to work on. But I’m very lucky that they found me because I owe my job and my life to their work.”

With his wife, Emily, by his side, Leahey said recovery has been challenging but he and his bandmates were back on the road playing concerts just two and a half months after the operation. Leahey is also relieved that he still looks the part of a young musician instead of a brain surgery patient.

“I have a lot of hair. You could call it long rock star hair. This may sound frivolous, but I knew that I wasn’t going to feel like myself after surgery and I was scared by the possibility that I wouldn’t look like myself, either. The doctors did have to shave part of my head, but they pulled the rest of my hair up … and a week or so after the operation, when I was able to let my hair down, you couldn’t even tell.”

Now, he’s ready for the next phase of his life and career.

“Nearly losing my hearing kind of fired my jets. It lit a fire under me. I’m not a religious person but I do feel like this was one cross I had to bear, and hopefully there’s good stuff on the other side. My job is going well. My wife is awesome. My band is making an album next month with one of our favorite producers.”

Watching a young patient like Leahey recuperate and make plans for the future is one of the reasons Thompson said he continues to specialize in these lengthy and complicated surgeries for skull base tumors.

“It’s really challenging — intellectually, physically, emotionally, spiritually — because the stakes are pretty high. Nothing perhaps, for me, is more gratifying than seeing a patient with a very complicated surgical problem like a brain tumor from the beginning when they’re frightened and scared, and talk them through what they need to have done and do the operation, do it well and safely, and get them back to normal.” 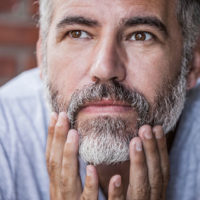 The Vanderbilt Skull Base Center offers state-of-the art care from nationally recognized doctors for skull base tumors and related conditions such as acoustic neuroma and trigeminal neuralgia. 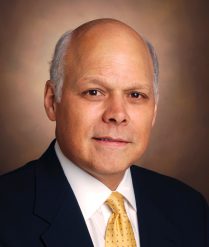 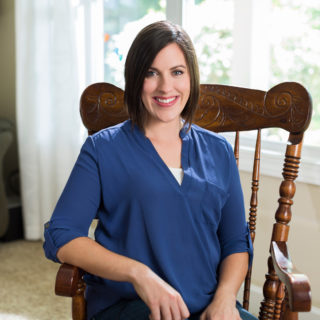 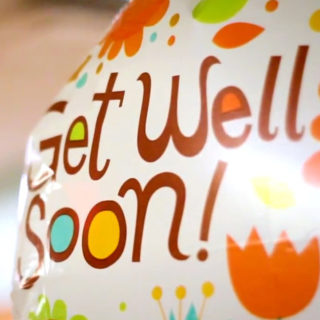 Video: How one mom battled — and beat — a brain tumor