Thriving together as a family managing diabetes 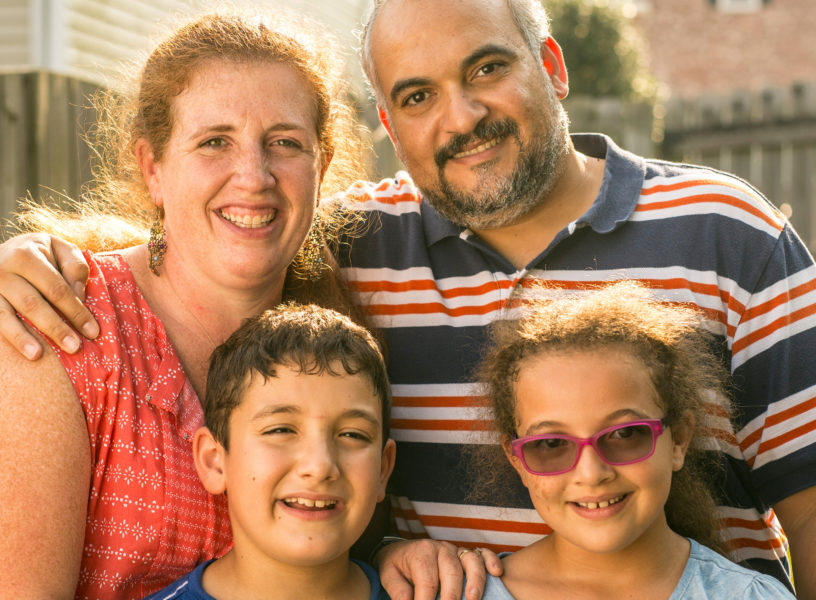 Taking care of this chronic disease beyond the clinic, in real life — with help.

Outside of work and school, the Elbarky family spends just about every hour of the day together: Board game nights. Trips to the gym. Taekwondo class three times a week.

For the family of four from Spring Hill, Tennessee, that time together is more than just a way to stay close. It’s how they stay healthy.

Omar Elbarky and his mother, Heidi, have type 1 diabetes, and family plays a crucial role in helping manage the illness. They plan their meals together. They work out together. And they count carbs together.

And although Omar’s father, Mo, and sister, Noorah, do not have the illness, they are just as dedicated to creating an environment in which Omar and Heidi can thrive.

“When we do something, we either all do it or none of us do it,” Mo said. “Omar and Noorah don’t know life any differently.”

That family-centered approach to managing diabetes is a central message of the care providers at Vanderbilt Eskind Pediatric Diabetes Clinic, one of the largest pediatric diabetes centers in the country.

“There’s so much that is influenced by what the family does. Ninety-nine percent of the time they’re not in the diabetes clinic, so they have to be able to take care of this outside the office,” said Cindy Lybarger, APRN, CDE, a nurse practitioner and program coordinator at the clinic.

Type 1 diabetes is an autoimmune disease in which the body’s immune system attacks its own cells, destroying insulin-producing beta cells in the pancreas. Unlike type 2 diabetes, type 1 diabetes can’t be reversed with diet and exercise. In the United States, approximately 1.25 million children and adults have type 1 diabetes, according to the American Diabetes Association.

With a team of a dozen physicians, three nurse practitioners, nurses, dietitians and other care partners, the Pediatric Diabetes Program provides care to more than 2,500 children with diabetes from Tennessee and surrounding states.

Much of the care is geared toward involving the whole family in managing diabetes, from family-oriented classes to activities for siblings with a Child Life specialist.

“We consider them part of our family, and they consider us part of theirs,” said William Russell, M.D., Cornelius Vanderbilt Professor of Pediatrics and director of Pediatric Endocrinology and Diabetes at Monroe Carell Jr. Children’s Hospital at Vanderbilt. “This is no stretch in my mind. We often know them better than their pediatrician does. We see them four times a year. We have this really incredible relationship with these families that goes on for decades.”

Care providers at the pediatric clinic, which is housed adjacent to the Vanderbilt Eskind Clinic for adults, work with parents to give them the information and tools they need to help keep their child’s diabetes under control, all the while providing an atmosphere where children and parents can feel comfortable and engaged.

“It’s really a key part of how we care for kids, because a lot of our patients are so young and their parents are overwhelmed at first,” Lybarger said. “A lot of times I think parents are just shocked when they learn what they need to do to take care of a child with diabetes. They have to check their blood sugar four or five times a day, and give them multiple injections. As you can imagine, that can be pretty traumatic for some kids. So we work with the parents and the kids to show them that this is just now a routine part of the day.”

In addition to the rooms used for family and patient education, the clinic includes a Child Life activity area for patients and their siblings to learn about diabetes and managing diabetes in an age-appropriate manner, such as games or a conversation with Chuck, the puppet of a boy with type 1 diabetes.

Family-themed events are also part of the way that the clinic reaches out to patients and their relatives and friends. The Diabetes Family Day event held each year is designed to provide education about managing diabetes and allow children to connect with other children with the condition, and parents with other parents. The day features speakers who have not let their illness get in the way, such as a young Canadian climber who scaled Mount Everest despite having type 1 diabetes.

Being part of research

Another opportunity for patients comes through the clinic’s participation in Type 1 Diabetes TrialNet, an international consortium of researchers trying to find ways to prevent, delay or reverse type 1 diabetes. Vanderbilt is one of 18 clinical centers in the world participating in the consortium. All told, 150 medical centers and physician offices participate in the network.

“We’re making clinical research part of the experience of being a patient here,” Russell said. “We want to keep pushing the boundaries of how we can serve people better. The TrialNet program is an example of that.”

One ongoing TrialNet study is looking at whether drug therapy can stop or slow the progression of the disease. Three other studies focus on whether medication can prevent it. Yet another screens all relatives of people with type 1 diabetes to gauge their risk of developing it.

Another approach that sets the pediatric diabetes clinic apart is its focus on treating new patients in an outpatient setting.

“Most everywhere in the country, if you’re diagnosed with diabetes, you spend time in the hospital, whether you are sick or not,” Russell said. “When someone is newly diagnosed, we’d much rather provide education on an outpatient basis, so that really sets the tone of how this disease is cared for. We don’t want them to get the wrong message, that only professionals can manage this for you.”

Because many pediatric diabetes patients are diagnosed when they’re quite young, they spend years coming to the clinic and develop personal connections with clinicians and staff, several of whom also live with some form of diabetes and face some of the same challenges.

“They look back at us as a source of strength for them,” Russell said. “When a kid sees a pump hanging on the belt of a nurse or doctor, that kind of says, ‘Hey, they’re one of us.’”

For as long as Omar can remember, diabetes has been part of his life. He was first diagnosed with diabetes shortly before his fifth birthday.

It’s no surprise that Heidi, his mom, first suspected he might have the illness. She was intimately familiar with the symptoms. Because she had type 1 diabetes, she knew she was more likely to have a child who also had type 1. In fact, a woman with type 1 diabetes who gets pregnant before age 25, has a one in 25 chance of having a child with type 1 diabetes. After age 25, the risk changes to one in 100, according to the American Diabetes Association.

In the days leading up to the diagnosis, Omar had to go the bathroom frequently. On a trip to the grocery store, the boy complained of a terrible headache.

“It was a moment when the earth moved under my feet,” Heidi said. “So I said, ‘let’s check your blood sugar.’ He was 286, which I knew was way too high for a kid who doesn’t have type 1 diabetes. When my husband got home from work, we got in the car and went to Vanderbilt.”

Although Heidi had dealt with managing diabetes for most of her life, caring for a child with the illness was going to be a shift.

The clinicians and staff at the pediatric diabetes clinic were there every step of the way as Heidi helped Omar learn how to manage diabetes alongside the competing demands of life, said Heidi, who also receives her diabetes care at Vanderbilt.

“When our numbers don’t look pretty, they don’t fuss about things,” Heidi said. “It’s about not making people feel like it’s the end of the world when there’s a bad sugar reading.”

Lybarger said that approach is by design.

“We talk to kids about the diabetes team, and we’re your team,” she said. “To provide holistic care, you have to realize that diabetes may not be a family’s top priority at that moment. Other life stressors often get in the way.”

While managing diabetes was not new to Heidi, the clinicians and clinic staff reviewed the basics with her and Mo: counting carbohydrates, checking blood sugar and administering insulin. The goal is to manage the illness effectively to avoid potential problems down the road, such as kidney disease, heart disease and lower limb amputation, among other complications.

“I think in the long run we’re healthier in the decisions we make,” Heidi said.

Teaching children to take care of themselves

Part of the care for growing children is teaching them how to gradually take on more responsibility for managing the illness, said Jill Simmons, M.D., associate professor of Pediatrics. She is Omar’s primary endocrinologist.

“It’s really tricky for parents and providers to be able to determine at what time point it is OK for children to take on that particular responsibility,” Simmons said. “It’s quite variable from family to family.”

Part of the clinic’s role is helping the family make those decisions, Simmons said.

“We have to reach each child where they are,” Simmons said. “Type 1 diabetes is a great example of what we try to do in pediatrics in general: trying to provide care to kids that takes into account both the developmental stages of the child and the relationships in the family.”

For Omar, the care at Vanderbilt has been part of what helped him form confidence in his ability to recognize signs of high or low blood sugar and communicate that to his parents or teachers.

While the clinic has provided Omar the foundation of his understanding of diabetes, each year he also attends the local American Diabetes Association-sponsored Camp Sugar Falls, which provides another venue for fun and education for children with diabetes and their siblings. The day camp, which many Vanderbilt faculty staff help put on, is where Omar gave himself his first insulin injection, to the applause of counselors and fellow campers.

Noorah, who has spent many days with Omar at Vanderbilt for clinic appointments, has also attended the camp and spent time learning about diabetes, and she participates in TrialNet research.

“I’m glad that he’s got someone by his side to help him,” Heidi said. “If it’s not us, it’s her. I think that’s important for him to have as many people as possible standing by him.”

Nowadays, Omar has an insulin pump to help regulate his blood sugar. Sometimes he jokes with classmates that he’s part cyborg. When they don’t believe him, he shows off the electronic device hidden beneath his T-shirt. The pump, he tells them, acts like a pancreas, helping keep his diabetes in check by continuously giving him insulin and injecting more insulin when he needs it.

He looks forward to his quarterly visits with his friends at Vanderbilt, Heidi said.

“He feels right at home there,” Heidi said. “He knows that they have his back, and it’s about keeping him healthy. I think he feels very comfortable with those guys, and he feels like they’re part of his family too. He’ll probably invite them to come to his wedding.”

This story was originally published in Hope, the magazine of Monroe Carell Jr. Children’s Hospital at Vanderbilt. Photography by Daniel Dubois. 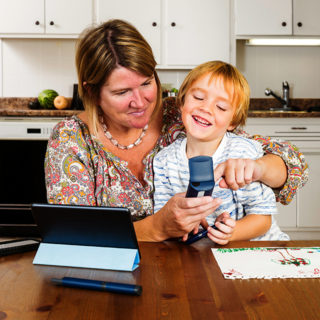 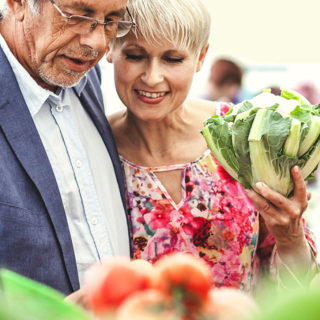 5 ways couples stay healthy when one spouse is diabetic 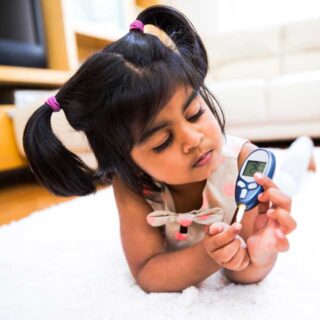